“The relational capacity of the posthuman subject is not confined within our species, but it includes all non-anthropomorphic elements, beginning with the air we breathe.” –  Rosi Braidotti

Biotechnological installation Inspiration* is a breathing station that dispenses  air enriched with the soil bacteria Mycobacterium vaccae, which has been found by scientists to improve mood, reduce anxiety and increase mental capacity. However, the dose of the distributed air is not always guaranteed or evenly enriched by the respiratory masks. Inhalation and exhalation are intimate respiratory processes that bind humans to their environment, however what happens with the connection once it is technologically mediated and conditioned? The question is, who or what  will dispense the dose? What will the dose contain? Who will survive?

In central bioreactor of Inspiration, the air is being saturated with particles of Mycobacterium vaccae by disintegration of alginate capsules filled with bacteria and soil. The dose of the happiness bacteria is dispensed by blowing the air through the three chambers of the bioreactor. The air travels from the bottom to the top and carries the bacterial aerosols towards the respiratory masks for visitors to inhale. However, gusts of air are not necessarily provided, nor evenly dosed.  Pressure cylinders and reanimation balloons push the happiness air through the masks in a calm, however uneven rhythm. Behind the masks we are not all equal, how will we breathe? 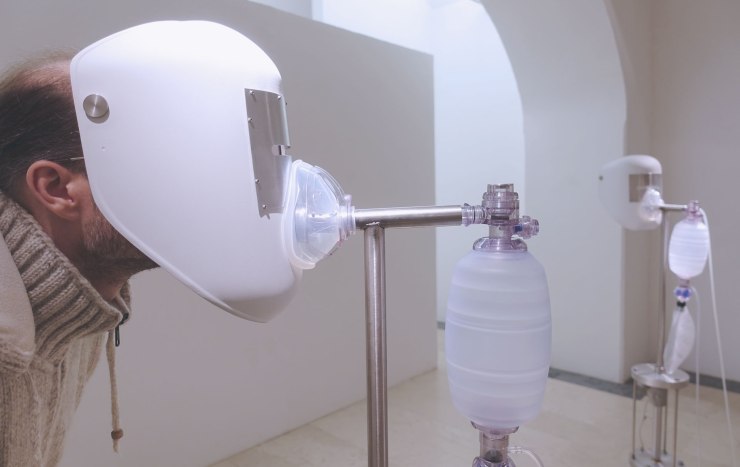 Mycobacterium vaccae much in the same way as serotonin-enhancing antidepressants blunts the emotions, including that precious elation of romance that is necessary for the growth and perseverance of romantic love. Thus Inspiration may be experienced also as a breathing station for relieving the obsessive clutch of romantic love and open human psychological capacity to other kinds of love towards either humans, non-humans or mineral agents. It can be thought of as a tool to explore how to break the obsession with romantic love in order to feel new qualities of love and maybe make kin with other species and environment.

Inspiration breathing station is seeking for a positive connection to the planet we inhabit, however it is also very conscious of the fact that the respiratory exchange is and will be unevenly  technologically mediated, controlled and administered.

*Title of the artwork originates from the phase in the respiratory process termed inspiration. The word draws its meaning from inspirare [lat.]: to breath life into; to instill something in the heart or in the mind of someone.

All human and non-human actors are immersed in the planetary metabolism of matter circulating through the lithosphere, the atmosphere, the hydrosphere and the biosphere. Biogeochemical circulation between spheres is catalyzed by feedback loops of microbial metabolism, which connect all biological and technological agents into an intra_flux** of exchanges and relationships. Every atom on the planet passes through soil metabolism while making evolutionary feedback loops. 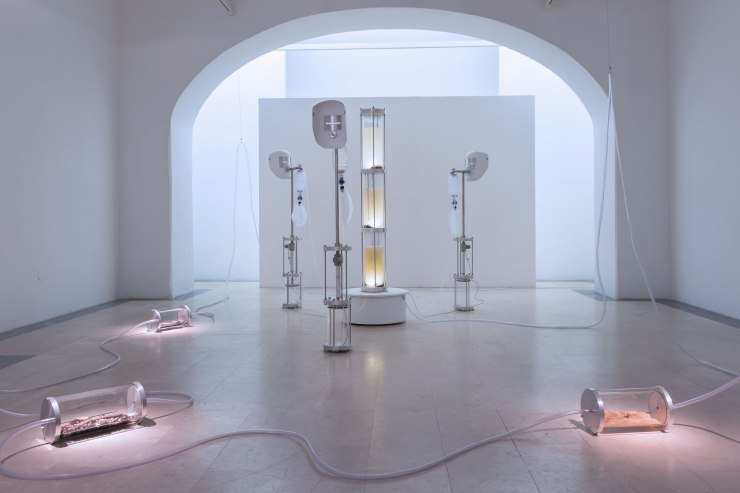 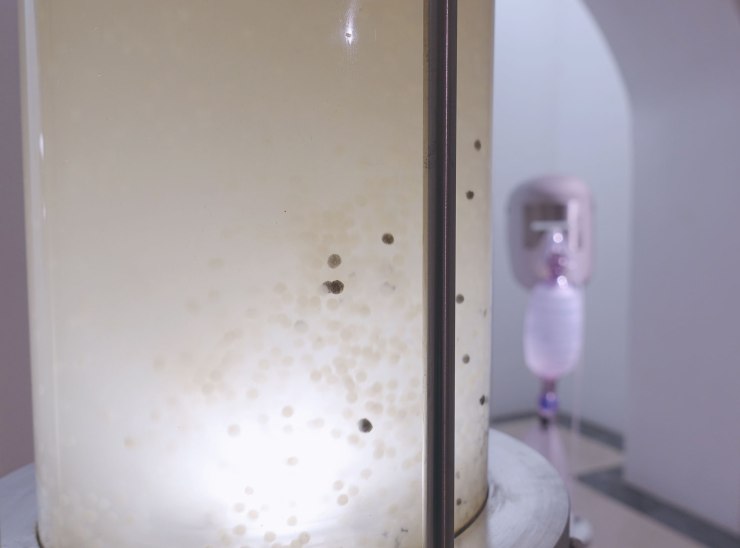 Moreover, respiratory process in the Inspiration breathing station does not bear its powers only in it’s substances. The vagus nerve connects lungs to every human organ, thus the rhythm of breathing influences the condition of the whole body. Breath is the only conscious activity which has the power to influence  the functioning of all the organ systems, it can consciously excite or relax the body by regulating the length and depth of the breath. Inspiration thus suggest to the inhalers a relaxing rhythm that calms the vagus nerve.

Breathing is one of the feedback loops that entangle human beings with the environment. During the first inhalation and last exhalation a mixture of gases and aerosols is metabolised  in the lungs, which can either be beneficial or adverse. The dosage influences quality of life of the organism as well as its survival. The air pollution problem is reflected in numerous respiratory diseases and fatalities increasing every year globally. Intensive urbanization and deforestation  are causing the situation to deteriorate even further.

Inspiration breathing station is seeking for a positive connection to the planet we inhabit, however it is also very conscious of the fact that the respiratory exchange is and will be unevenly technologically mediated, controlled and administered.

**Intra_flux [neologism]: The flow of intra-actions that occurs among  actors in the planetary metabolism.